Most of you are probably familiar with the Transporter Problem. 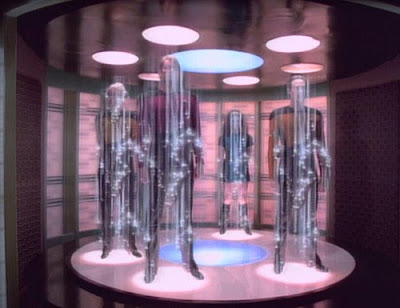 The use of this low-resolution image for commentary purposes should qualify as fair use. Please don't sue me.
For those who aren't, here's the background: You step into a Star Trek-style teleportation device and are instantly transported from one place to another. This process involves scanning your body at high resolution, deconstructing it, transmitting the data (and potentially the original molecules) to the destination, and finally reconstructing your body according to the schematic.

So the problem is this: the transporter kills you.

Oh, sure, it makes a copy at the other end, and from the perspective of that copy nothing untoward occurred, but from the perspective of the original who is disintegrated, it's curtains. It doesn't matter whether the same molecules are used to reconstruct the copy at the other end: continuity of consciousness is disrupted (and when you get right down to it one carbon atom is as good as any other).

The main character in Cory Doctorow's excellent Down and Out in the Magic Kingdom muses over a similar problem*, so perhaps Bones was right to be wary of the device after all.

Regardless, it is clear that if such a device were possible, it would stand to reason that it should be equally possible to create a perfect copy without destroying the original. I was chatting with some coworkers about this a few weeks ago, and one raised the following question: If an exact copy of you were made, down to the molecule, but before it happened you were given a choice between having your leg sawed off (sans anesthetic) or to have the copy's leg sawed off, which would you choose? Does it make a difference?

I should think not. Taken together, we're down a leg either way, and since we're identical duplicates it doesn't matter whose leg it is. After the event, both the copy and the original will have the memory of choosing who will have the leg sawed off: one will remember choosing itself, and the other will remember choosing the other. I figure that it's best to choose randomly, to avoid any hard feelings.

Although one of my colleagues was in complete agreement, another thought that this was a blatant violation of my self-interest, and that my choice was irrational. But the fact remains that on the other side of "the event", both of them are you: What possible difference could it make?


* This book, incidentally, has one of my all-time favourite opening lines: "I lived long enough to see the cure for death; to see the rise of the Bitchun Society, to learn ten languages; to compose three symphonies; to realize my boyhood dream of taking up residence in Disney World; to see the death of the workplace and of work. I never thought I'd live to see the day when Keep A-Movin' Dan would decide to deadhead until the heat death of the Universe."

The book is available for free, so you have no excuse not to read it!


Addendum: Zach Weiner has apparently already covered this topic with some authority.
Posted at 18:07
Email ThisBlogThis!Share to TwitterShare to FacebookShare to Pinterest