Stuff I Used to Believe: The Curse of Macbeth!

Yes, yes, actors and their superstitions. 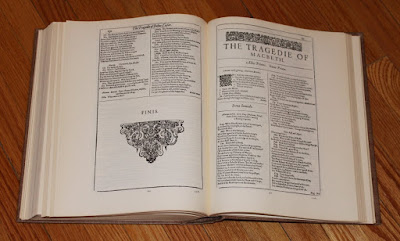 My First Folio edition of The Tragedie of Macbeth.
Want to know a good way to freak an actor out? Say "Macbeth" in a theatre.

Brian Dunning has previously covered this topic in some detail, but I figured that I might as well add a few personal touches.

I have a minor in theatre, and have performed in several amateur and semi-professional productions around Winnipeg. I have also taught drama to children at MTYP (briefly), the University of Manitoba's Mini-U, and during a summer program with the Evergreen School Division in Gimli. While I have never performed "The Scottish Play", I do have the "Dagger Speech" memorised, as I did a three-year stint at a local dinner theatre and one of the most popular characters that I played was an old thespian well into his dotage who would soliloquise at the drop of a hat.

If you're involved in any way with theatre, you're going to have to deal with superstitions. Many of my friends are actors, and they are by-and-large good folk, but in my personal experience* they are more superstitious than most. Although I used to be somewhat superstitious myself, I was always more amused than actually concerned by the putative Macbeth "curse". But, to avoid ruffling feathers, I avoided saying "Macbeth" all the same.

One particular friend of mine (I'll call her "Beth") has related the following story to me on several occasions. Beth was performing in a play with another actor (I'll call her "Macy") who refused to respect the beliefs (and superstitions) of others. Macy would name The Scottish King at every opportunity, and when asked politely to stop, first by Beth, then by other cast members, and finally by the director, Macy responded by childishly yelling the word over and over again. But by the time the run of the show was done, Macy, Beth, and the director had each broken a leg.

I don't recall ever believing that any curse was actually responsible for the events narrated in that story, however I repeated it often enough as an interesting anecdote.

I've heard poor ticket sales, accidents, and even traffic jams blamed on the curse, when it seems to me more likely that poor acting or promotion, carelessness, poor planning, and even the vagaries of chance were responsible. But the curse makes for a convenient scapegoat.

I play a popular collectible card game from time to time, and I see this sort of childish behaviour play itself out in that arena, too. When a player loses a game, it is always because "it was a bad shuffle", or it would have taken "just one more turn" to win. I even hear players say, "My deck hates me!" Few seem ready to take responsibility for the fact that they didn't play well.


* Logical fallacy alert!
Posted at 15:14
Email ThisBlogThis!Share to TwitterShare to FacebookShare to Pinterest