There be spoilers. You have been warned. 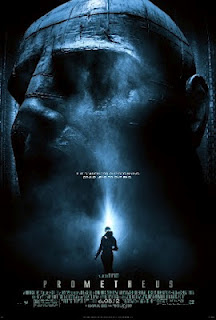 I don't believe that I have ever been this insulted by a film. Ever.

I don't habitually use language like this, but... Fuck that movie.

Before I saw it, my friend Gary told me that it was "officially the worst film" that he had seen in a long time. "Please, do not spend your money on it. RottenTomatoes.com lies. It lies so much." I assumed that he was speaking hyperbolically. I was mistaken.

Several reviews from several people have adequately covered most of the problems that I had with the film. I'll post a few stray observations below, before linking to the more comprehensive reviews.

You'll probably notice that I'm a little angry at the people who made this film. I was really looking forward to it, and I was sorely disappointed. I can forgive the hand-waving and the bad science and the characters behaving like utter morons—but such bad storytelling really bothered me.

So there's a cave painting of a tall dude pointing at five dots in the sky. What the hell are those dots supposed to be? A constellation? Sure, lets go with that. And now they've arrived at the only "galactic configuration" that matches the map. Ignoring the fact that the term "galactic configuration" is either misused or hopelessly vague, there's only one star at the destination. If those dots were stars, how did you know which one to go to? They can't be planets, because there seems to be only one planet in the system. With one moon. And why did the cave paintings point to an alien bioterrorism facility instead of something more helpful? I guess the aliens hate us. Except that the cave paintings are from a very long time ago. Ridley Scott revealed in an interview that the reason the Engineers hate us is because we killed space-Jesus (not kidding), but these paintings actually predate them being mad at us. So sending us to their weapons factory to be horribly slaughtered was, what, a practical joke?

The thing that I found most offensive about the film wasn't the fact that they called evolution "Darwinism" (although that alone is probably enough to make me lose all respect for anyone who approved the script), or the fact that "that's what I choose to believe" is considered sufficient to justify the pants-on-head assertion that Erich von Däniken had any idea what he was talking about. Because it makes sense to just believe things arbitrarily, instead of believing things that, you know, have some basis in reality.

No, the most offensive thing about the film was the tremendously hackneyed writing, filled to the brim with trite dialogue, cheap "twists", and characters doing things without any apparent motivation. The film seems sadly convinced that it is exploring deep and profound questions, but collapses into a mess of plot-holes and bad science after the most cursory of inspections.

And the big reveals? That Weyland was still alive? Yeah, I know! That was painfully obvious from the moment that Noomi Rapace wants her alien squid-baby aborted (sorry, a "delivered by Cesarean"—can't use the "A-word"!) and we learn that the AutoDoc is configured only for male patients. That Weyland is Charlize Theron's father? Yeah, I know! The way she delivered that line, by the way? The worst part of the film, in my opinion.

When entering a scary alien structure on an unknown moon, be sure to take your helmet off at your first opportunity, because there couldn't possibly by any dangerous alien pathogens in the air*, and the fact that the air contains some level of oxygen is surely a guarantee that it is safely breathable and will remain so. Also, don't bring any weapons, because that would be stupid.

There's more, like the fact that the guy who criticizes Noomi Rapace for wearing a cross has a cross tattooed on his arm. There's the fact that they inexplicably have Guy Pearce (in horrible old-age makeup) playing a centenarian. Because, as my friend Brendan pointed out, there is not a single distinguished elderly actor in Hollywood. And running directly away from a large alien spaceship that's rolling toward you, rather than dodging to the side? Really?

I could go on, but it's already been expressed far better here:

Prometheus in 5 Minutes or Less
Prometheus: An Archaeological Perspective (sort of)
Red Letter Media talks about Prometheus
Prometheus: Pandering to Anti-Science
The Science of Prometheus

It's worth noticing that I actually disagree with Steven Novella a bit in The Science of Prometheus, above. I thought that the bad storytelling was actually worse than the bad science. And you know me: I love me some science.

Addendum: Phil Plait has weighed in, and mentions something that actually caused me to say, "Oh, come on!" while watching the film:

In a key scene, scientist Elizabeth Shaw compares a sample of Engineer tissue to human DNA, exclaiming that it's a 100 percent match. The thing is, if you compared two humans' DNA you wouldn't get a 100 percent match! That only happens with identical twins. There are lots of DNA variations between humans, so a 100 percent match is literally impossible. And last I looked, we're not 8-foot-tall bald translucent bodybuilders with anger management issues.


* My understanding of theoretical astrobiology leads me to believe that normally this actually wouldn't be a problem, because the probability that any given alien pathogen would be compatible with human physiology would be vanishingly small—but given that the whole reason that they're there is that they think the aliens made the human race, the idea that there might be some physiological compatibility there suddenly becomes a whole lot more plausible.
Posted at 11:29
Email ThisBlogThis!Share to TwitterShare to FacebookShare to Pinterest