I've been a huge fan of BioWare games ever since a high-school friend introduced me to Baldur's Gate. I was enormously fond of Dragon Age: Origins, and although I was disappointed by some of the changes that were made for Dragon Age II, I've found it to be an altogether enjoyable game.

One of the aspects of the Dragon Age games that has impressed me most is the way that inter-character romances are handled: when interacting with the player character, some NPCs are clearly heterosexual, while others are attracted to characters of the same gender*. The fact that the game doesn't tiptoe around (or simply ignore) LGBT issues deserves high praise in my opinion, and serves to expand gameplay options while at the same time doing its small part to destigmatize homosexual relationships. 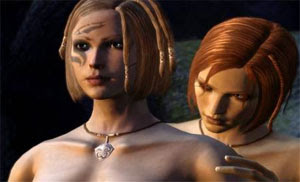 Unfortunately, this choice on the part of the developers isn't without its detractors. Take this post from the BioWare forums, for example:

To summarize, in the case of Dragon Age 2, BioWare neglected their main demographic: The Straight Male Gamer.

I don’t think many would argue with the fact that the overwhelming majority of RPG gamers are indeed straight and male. Sure, there are a substantial amount of women who play video games, but they’re usually gamers who play games like The Sims... That’s not to say there isn't a significant number of women who play Dragon Age ... but there should have been much more focus in on making sure us male gamers were happy.

The fact that a "No Homosexuality" option, which could have been easily implemented, is omitted just proves my point.


Seriously? So you're saying that you want your video game to have an option that will make all gay characters straight?

BioWare's response, however, was pitch-perfect:

The romances in the game are not for "the straight male gamer". They're for everyone. We have a lot of fans, many of whom are neither straight nor male, and they deserve no less attention. We have good numbers, after all, on the number of people who actually used similar sorts of content in DAO and thus don't need to resort to anecdotal evidence to support our idea that their numbers are not insignificant... and that's ignoring the idea that they don't have just as much right to play the kind of game they wish as anyone else. The "rights" of anyone with regards to a game are murky at best, but anyone who takes that stance must apply it equally to both the minority as well as the majority. The majority has no inherent "right" to get more options than anyone else.

And if there is any doubt why such an opinion might be met with hostility, it has to do with privilege. You can write it off as "political correctness" if you wish, but the truth is that privilege always lies with the majority. They're so used to being catered to that they see the lack of catering as an imbalance. They don't see anything wrong with having things set up to suit them, what's everyone's fuss all about? That's the way it should be, any everyone else should be used to not getting what they want.

And the person who says that the only way to please them is to restrict options for others is, if you ask me, the one who deserves it least. And that's my opinion, expressed as politely as possible.


David Gaider, the BioWare rep. quoted above (and lead writer for DA:O and DA2), got it right when he said, "an ignorant opinion politely expressed doesn't make it less ignorant".


* I believe that these characters are actually all programmed to be bisexual, at least in Origins, but I'm not certain.
Posted at 15:02
Email ThisBlogThis!Share to TwitterShare to FacebookShare to Pinterest