In my experience, downtown Winnipeg bus stops are usually littered in equal parts with discarded Tim Hortons cups, bottles of mouthwash, Bible tracts, and copies of The Watchtower. I have a tract here that I found at just such a bus stop, and I figured that I might as well give it a read. It's no Chick tract (although Chuck and Leighton have dissected those in the past, here and here), but it'll have to do.

Tracts are all the fun of a Jehovah's Witness, but with the portability of a sandwich wrapper. Generally speaking, they tend to assume that you're a lapsed theist of some sort, and you just need to be reminded that Jesus needs you to polish his sandals; they rarely even offer any actual rationale for believing in a deity. 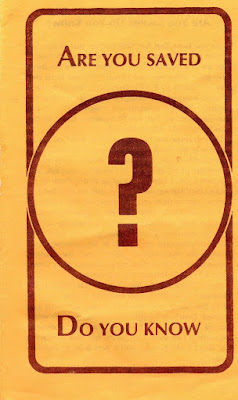 Let's play along, shall we? "Er, I don't know. Whatever do you mean? Saved from what?" 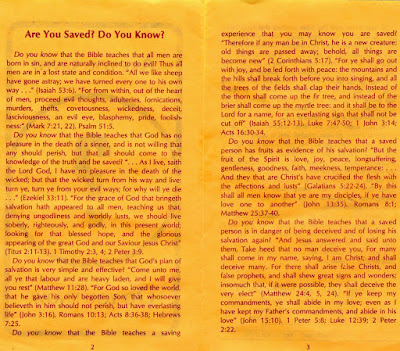 Do you know that the Bible teaches that all men are born in sin, and are naturally inclined to do evil?


"Gasp! I had no idea! Plus you've backed up your assertion with evidence, straight from the Bible!"

Do you know that until you demonstrate that a deity exists and he is particularly fond of your book, appeals to the Bible will remain unpersuasive?

Do you know that the Bible teaches that God has no pleasure in the death of a sinner, and is not willing that any should perish, but that all should come to the knowledge of the truth and be saved?

Well, since God is purportedly omniscient, omnipotent, and omnibenevolent, he knows exactly what it would take for me to "come to the knowledge of the truth and be saved", it is within his power to convince me, and he is inclined to spare me eternal torment. Strangely, he has yet to prevent any evidence.

Do you know that the Bible teaches that God's plan of salvation is very simple and effective?

Seriously, though, one would assume that God's plan would be sensible, efficient, and efficacious; he is, after all, the supreme creator of the cosmos, who is a perfect incarnation of the appearance that a leader should have.

God's plan is simple and effective: it involves creating a race that is, after all, only human, yet holding them to an impossibly high ethical standard. After ejecting the humans from paradise for having the audacity to seek to know right from wrong, God no doubt realises his mistake and drowns just about every living being on the planet. He then lays down 613 hopelessly confused rules and regulations to a small band of desert-dwelling savages and instructs them to spread the good word by slaughtering as many of their neighbours as possible.

A few thousand years later, much to his chagrin, God notes that people are still having trouble following the rules: they're still enjoying ham and cheese sandwiches and blended fabrics and the like. Rather than simply drowning everyone again, however, he decides to wander around the desert for a bit and see if he can't talk some sense into people. Instead of creating a body the old-fashioned way (sculpting one out of dust and breathing on it), he decides to impregnate a woman without her permission (always a winning strategy). Once born, he walks around the desert for a bit, introduces his disciples to communism, and then is brutally slaughtered by the Romans and/or Jews.

But that's all part of the plan. You see, even though he makes the rules, he can't forgive people without human sacrifice. So long as you recognise that you are unworthy scum and admit that you don't deserve life, God will forgive you for the egregious sin of simply existing, and will admit you to the great amusement park in the sky—but only if you don't have any trouble believing in precisely the right version of the events described above.

Not to worry, though, because God, in his literally infinite wisdom, provided us with evidence that this is all true, in a badly-preserved, consistently mistranslated book with a decidedly provincial outlook that contradicts many major branches of scientific inquiry and endorses a moral code that would make Genghis Khan blush.

Yes, simple and effective are precisely the words that I would use to describe that plan.

Do you know that the Bible teaches a saving experience that you may know you are saved?

I've never had a "religious experience" that I can recall, but I've spoken with those who have. By and large, the feelings that they describe are similar to those that I experience when listening to power metal or watching Zach Snyder's adaptation of Watchmen (I know, I know, there's no accounting for taste). I've heard Matt Dillahunty express similar sentiments.

Do you know that the Bible teaches that a saved person has fruits as evidence of his salvation?


"You mean that if I convert, God will give me stuff? Just like Santa? Neato!"

Presumably God will also ensure that such fruits are completely exempt from confirmation bias.

Do you know that the Bible teaches that a saved person is in danger of being deceived and of losing his salvation again?


"Gosh... Well, I'd better stop thinking critically, then; I wouldn't want to lose my way!"

The message here seems to be: once you've made up your mind, never change it. 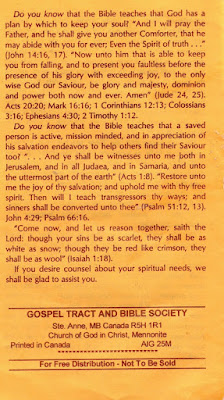 Do you know that the Bible teaches that God has a plan by which to keep your soul?


"Great! I guess that means that I don't have to worry about it!"

As we've seen, God's plans have a marked tendency to be fairly strange—and to be incidentally beneficial to those who claim to be his messengers. Weird.

Do you know that the Bible teaches that a saved person is active, mission-minded, and in appreciation of his salvation endeavours to help others find their Saviour too?


"Wait a second... That sounds like work! You tricked me!"

Of course it does; otherwise, how would the meme propagate itself?

"Come now, and let us reason together, saith the Lord..."


Even though this Isaiah quotation is often used by disingenuous apologists, I still kind of like it. If only the writers of this pamphlet actually understood what "reason" was...

More tracts to come!
Posted at 12:08
Email ThisBlogThis!Share to TwitterShare to FacebookShare to Pinterest