Have you ever had a religious person tell you that there is no good without God? Most atheists I know have heard that sort of nonsense time and again, even from family and friends. That sentiment was the impetus behind The Nonbelievers' Beliefs, a short film that I produced with Scott Carnegie.

The Nonbelievers' Beliefs premiered at the second annual MASH Film Festival at the Park Theatre in Winnipeg. The film is available for free on YouTube in high definition, and is also embedded below.

We cut about five hours of footage down to just under twelve minutes. Scott did an amazing job with the editing, and although I'm sorry that we had to make so many cuts I'm very pleased with the result.

With one exception, all of the interviews were filmed in Winnipeg. PZ Myers, our surprise special guest, was the only exception: Scott and I (and Ashlyn, our production assistant) hopped in Scott's car and drove eight hours down to Morris to interview him, and after our half-hour chat we got back in the car and drove the eight hours back. PZ was very generous with his time, and we really appreciate his help with this project. He was even kind enough to sign my Bible! Thanks, PZ! 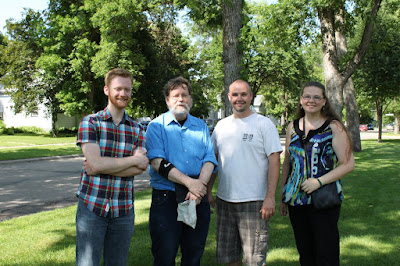 And thank you to everyone else who participated in this project. Your reward is that you now have a PZ Number of 1.

Addendum: It's worth noting that the film didn't explore as much of the philosophical underpinnings of ethics as I would have liked it to. Several of our interviewees discussed nontheistic ethical philosophies (such as Act Utilitarianism) and others discussed how we arrive at our values. We had to keep things short, however, so Scott settled on the "empathy and compassion" theme that you see above. I think that it works wonderfully.

On a completely unrelated note, I should mention that I spent much of my time on the drive down to Morris worrying about whether I should call Professor Myers "PeeZee" (the standard American pronunciation) or "PeeZed" (the standard Commonwealth pronunciation). On the one hand, it's two letters, and I pronounce the letter Z "zed"; on the other, it's PZ's name. The practical upshot of all of this was that I don't think I actually referred to him by name even once while we were there, which is a shame.
Posted at 12:00
Email ThisBlogThis!Share to TwitterShare to FacebookShare to Pinterest