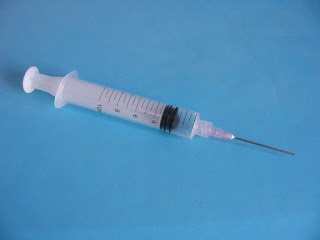 Image from Wikipedia. Licensed under CC Attribution-ShareAlike.
I just sent a quick email to the folks at The Skeptics' Guide.

It seems to me that this story's title should actually be "H1N1 vaccine linked to 700 percent increase in miscarriages, but not by anyone who knows what they're talking about".

My boss emailed this article to me this morning: http://www.naturalnews.com/030657_vaccines_miscarriages.html. I'd be interested in your interpretation, and it may make a "good name that logical fallacy".

Here's my take on it.

It seems to me that they're just saying that as rates of vaccination rise, rates of miscarriage rise ("the rate of miscarriage among pregnant women during the 2009 H1N1 / swine flu pandemic soared by over 700 percent compared to previous years, pointing directly to the vaccine as the culprit"). Sure, this is interesting, and perhaps further analysis should be performed. But the fact that the buzz of my alarm clock strongly correlates to the rising of the sun does not indicate that the sun's rising is caused by my alarm clock. The assertion that this points "directly to the vaccine as the culprit" can only be either ignorant or dishonest.

The Natural News site continues to poison the well by saying "the CDC denies the truth and continues to insist nobody has been harmed", when in fact it seems to me that the CDC is actually saying "you haven't demonstrated a causal link". Straw man, anyone?

And then the article loses its last shred of credibility by bringing up Thimerosol. Again. In my opinion, they finally jump the shark in the "related articles" section, in which links to a video called "Autism - The Hidden Truth".

I don't know much about the actual science, here, but it seems to me that their reasoning is WAY off. It is, of course, entirely possible that there is a link between the two, and that the vaccines are harming the foetus. But this article seems to be overplaying its hand.

I hope that this issue does get a bit of airtime on SGU, as the safety of the flu vaccine is a very important issue. I hope that the vaccines are safe. The precautionary principle may get a bit of play here, but at the same time the seasonal flu vaccine has a long history and has been very well tested. It seems implausible that that the H1N1 vaccine would pose safety risks beyond those of the seasonal vaccine; if this were the case, I would be surprised.

But I'm not a medical doctor or researcher, and I'll defer to their expertise.

The King analysis is nothing but rank pseudoscience, twisted to his anti-vaccine agenda. It has been widely repeated by anti-vaccine, anti-government, and conspiracy-mongering sites – Natural News being just one site to uncritically parrot the false assumption that reported cases of miscarriage and stillbirth are additional cases caused by the H1N1 vaccine.

And yet the NCOW accuses the CDC of lying and falsifying their reports – because they present the public with science rather than King’s pseudoscience.

Meanwhile, the H1N1 flu presents an actual risk to pregnant women and their unborn children. Fear-mongering about the vaccine, therefore, has a body toll attached to it. The NCOW does this under the guise of defending the rights of women. Mike Adams seems only to want to sell his wares. I’m not sure which is worse.

Posted at 11:21
Email ThisBlogThis!Share to TwitterShare to FacebookShare to Pinterest