We have three items to talk about briefly.

First on the list is the pregnant nun ad that was recently banned in the UK: 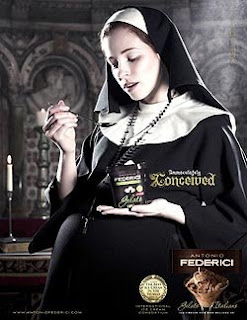 "We considered the use of a nun pregnant through immaculate conception was likely to be seen as a distortion and mockery of the beliefs of Roman Catholics. We concluded that to use such an image in a light-hearted way to advertise ice cream was likely to cause serious offence to readers, particularly those who practised the Roman Catholic faith," the ASA decision says.

Tip of the habit to my wife for sending me the link.

Next, we have the man who was arrested for practicing witchcraft:

A Brampton, Ont., man is charged with practising witchcraft to exorcise money from a victim.

He also urged people who have sought advice from the suspect to contact investigators.

"We know people may be embarrassed," Shah said, but police allege the suspect took advantage of the victims' beliefs to defraud them.


Okay, so (despite the headline) he wasn't actually arrested for practicing witchcraft—he was arrested for fraud. Perhaps some would call this a "stupid tax" (a name that I've often heard associated with the lottery), but not me. I'm simply not cool with taking advantage of people. Remember Wheaton's law: Don't be a dick.

Again, the missus gets a tip o' the spirit trumpet for alerting me to this one.

ZOMG!!1! The radia-shun is gonna get me!

And finally, Dr. Gifford-Jones has posted a follow-up to last week's article regarding so-called "dirty electricity", entitled Guard against dangers of radiation: Dirty electricity emitted from many devices we use:

Dirty electricity is produced when transformers convert clean 60-hertz household current into low-voltage power for electronic devices. This creates micro surges of electricity that contain up to 2,500 times the energy of a conventional 60-Hz system. This electrical pollution causes a negative effect on our health.


Honestly, there's not a lot of new information, here. At least he didn't talk to "renowned international expert" (and crackpot) Magda Havas again. (For more information, see my discussion of "dirty electricity" from earlier this week. Incidentally, it seems as though the Free Press has decided against publishing my letter to the editor.)

There are a couple of juicy tidbits here, though:


"A Swedish study"? Could you be a little more specific?

If he's talking about INTERPHONE (mentioned later in his article, though not by name), I find it puzzling that, rather than referencing the entire study (which also included data from Australia, Canada, Denmark, Finland, France, Germany, Israel, Italy, Japan, New Zealand, Norway, and the UK) he references only the Swedish study (which, like the others, was also published independently). This would seem to be the very definition of cherry-picking.

If he's not talking about INTERPHONE, providing a reference would have been nice. But Dr. Gifford-Jones continues:

In May 2010, the World Health Organization released a 10-year study into cellphone use and cancer rates. It recognized a significant correlation between malignant brain tumours and people who used their cellphones, wireless home phones or Wi-Fi-connected devices for more than 30 minutes combined daily.


I figure that Gifford-Jones must be referring to the INTERPHONE study (which he dishonestly mischaracterised last week): a ten-year study funded by International Agency for Research on Cancer (IARC, part of the WHO) that was published 17 May 2010. But that seems to be where the similarities end. As far as I can tell, there are no data in this study regarding WiFi, and I would dispute his claim that it "recognized a significant correlation between malignant brain tumors and people who used their cellphones... more than 30 minutes combined daily".

So what did the study conclude?

The international pooled analysis of data gathered from 13 participating countries found no increased risk of glioma or meningioma with mobile phone use of more than 10 years.


The study actually found a decreased risk of glioma and meningioma for moderate mobile phone use. (Unless you surmise that cell phone use has a protective effect against cancer, this is probably a statistical artefact.) There was a correlation found between increased incidence of one form of cancer and extended use of mobile phones, but the authors conclude that the biases and errors in the study prevent them from drawing a causal relationship.

From the INTERPHONE study press-release (PDF):

A reduced OR [odds ratio] for glioma and meningioma related to ever having been a regular mobile phone user possibly reflects participation bias or other methodological limitations. No elevated OR for glioma or meningioma was observed ≥10 years after first phone use. There were suggestions of an increased risk of glioma, and much less so meningioma, in the highest decile of cumulative call time, in subjects who reported usual phone use on the same side of the head as their tumour and, for glioma, for tumours in the temporal lobe. Biases and errors limit the strength of the conclusions that can be drawn from these analyses and prevent a causal interpretation. [Emphasis added.]


Even if it were true that a causal relationship existed between extensive cell phone use and cancer (and the WHO states flat-out that there is no dose-response relationship: "there was no consistent trend of increasing risk with greater duration of use"), it is still unlikely to be a problem:

Today, mobile phone use has become much more prevalent and it is not unusual for young people to use mobile phones for an hour or more a day. This increasing use is tempered, however, by the lower emissions, on average, from newer technology phones, and the increasing use of texting and hands-free operations that keep the phone away from the head.


Gifford-Jones is free to reinterpret the INTERPHONE data, if he thinks that the researchers got it wrong—but that's not what he's doing. He's grabbing little snippets of their analysis out of context and failing to provide his readers with an easy way to identify which studies he's talking about—this makes it difficult for a layperson to examine his sources.

So feel free to abide by the precautionary principle—but don't dishonestly inflate your case.

Tip o' the ol' Stetzer filter to Derek, who dropped a hard-copy of the article on my desk this morning.


I don't think that either of those suggestions are good for anybody's children.

I also find it amusing that the same crazy comment from Gifford-Jones' last article has been posted almost verbatim to this new one. Even his the comments are recycled!
Posted at 14:47
Email ThisBlogThis!Share to TwitterShare to FacebookShare to Pinterest