The Pleasure of Figuring Things Out

Not to be confused with The Pleasure of Finding Things Out, a (by all accounts excellent) book by Richard Feynman.

Caveat: This entry will be somewhat more self-indulgent than usual. You have been warned.

I recently bought some delightful new invisible bookshelves; they ingeniously wrought to create the illusion that the books are hanging unsupported in the air. I am thus far very pleased with them, and intend to buy several more. 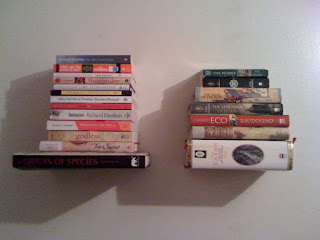 After affixing them to the wall, yesterday, it occurred to me that many of the books that I intended to put on them were quite weighty, and might exceed their carrying capacity. I checked the packaging and, sure enough, nine kilograms (about twenty pounds, for you Americans) was the limit.

I spent a moment scratching my head, and decided to consult my bathroom scale. I wasn't sure if it was sensitive enough to discern such small masses with any accuracy, but I figured that if it came down to that I could always weigh myself while holding the books, and subtract my weight without them, the way one might weigh a cat, dog, snake, turtle, microraptor, or any other household pet. This was rendered moot, of course, when I stepped into the lavatory and discovered that I didn't own a bathroom scale.

Many people would have, at this point, run out to the store to buy the device; indeed, I briefly considered doing just that, as such things are useful to have on hand in case one has guests and a spontaneous weight-loss competition happens to arise. But that would have been no fun, and besides, the missus was out with the truck, and I wasn't looking forward to the walking to the store when it was thirty below.

So I fetched a broom handle, some floorboards left over from when I laid down the hardwood last summer, a lightweight mop bucket, a measuring cup, and the stack of books in question. I had all the makings of a balance scale: just add water.

Using the measuring cup, I filled the mop bucket with nine litres of water (for those of you who recall highschool physics, the litre is a derived metric unit defined as the volume of one kilogram—or grave, if you want to be archaic—of water*), then took a little bit out to make up for the mass of the bucket—I didn't want to be too precise. I used a measuring tape and pencil to mark the midpoint of the floorboards' length, set them across the broom handle at this point, and set the bucket of water on one end. Ensuring that the midpoint of the boards remained over the broom handle, I set the stack of books on the other end.

If the books lifted the bucket, then they were too heavy. Simple. 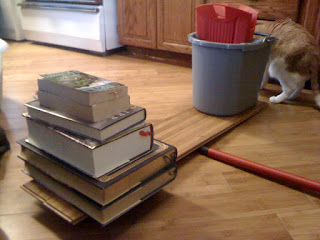 My cat, Spot, is puzzled by the contraption.

*Or rather, it used to be.
Posted at 23:48
Email ThisBlogThis!Share to TwitterShare to FacebookShare to Pinterest