I'm a long-time supporter of Richard Dawkins' OUT Campaign, and was an out-of-the-closet atheist and sceptic long before I realised that there was any reason to be in the closet. In fact, when I became aware of just how insane religious the greater part of the population of the United States was, I couldn't believe it. This was in the run-up to the 2005 Kitzmiller v. Dover case, however, so I think that I was entitled to my incredulity.

I grew up in urban Canada (Ontario and Manitoba), and most of my friends were atheists (although most by default rather than design; unless you live in Alberta, religion really isn't a big deal up here). That isn't to say that we don't have our fair share of kooks—it all just seems a little muted, compared to our neighbours below the forty-ninth.

I've never been uncomfortable discussing any issue openly and honestly, and it has irked me that, since the beginning, my blog has not featured my name. For various reasons that probably wouldn't interest the average reader, I haven't wished to have my name associated with an Internet presence; it still may prove to complicate things, but I've always been in favour of complete transparency, (which is why I do not require registration to post comments, and will not censor any comment short of spam). I hope that any point that I make will stand or fall on its own merits, but it is a common tactic of trolls to take issue with posts made in anonymity—"Aren't you willing to stand by your words?" Although this is a form of ad hominem attack, one of the more common logical fallacies that one encounters on the Internet, the truth is that I am willing to stand by my words.

Today, I go public with my full name and an easily identifiable photograph of myself. Although, truth be told, I am loath to replace this beauty: 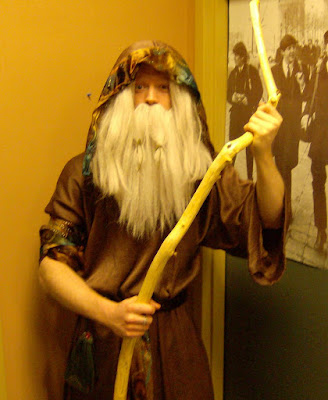 Believe it or not, I actually sewed most of that costume myself.

Also, some may notice that I have a girl's name.
Posted at 00:30
Email ThisBlogThis!Share to TwitterShare to FacebookShare to Pinterest