Here's Looking at You: The Magic of Iridology

You may have heard of iridology. If not, count yourself lucky to have avoided this little bit of quackery. It is the alternative medicine technique quick supposes that medical and psychological diagnoses can be made based solely on the inspection of the iris. It works on the same principle that allows a savvy computer technician such as myself to diagnose your hardware and software difficulties on your home computer by examining your webcam's focal device.

That is to say, iridology, like other forms of "eyology" (such as "sclerology"—also, but less commonly, "scleridology"—I swear that I'm not making these names up), is "considered pseudoscience by most medical practitioners and eye care professionals", to quote the Wikipedia entry. To put it more appropriately, it's complete, unadulterated, new-age*, woo-woo magic. 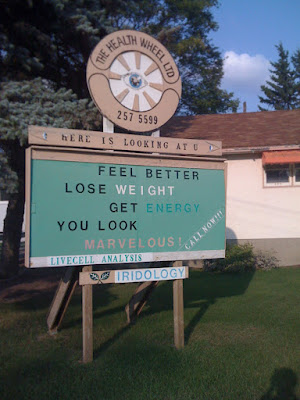 Which is why I was delighted when I heard Jane Dayus Hinch exclaim from my television set that she was taking a nervous bride-to-be to see her friend, a "renowned" iridologist. (I should defend myself parenthetically by asserting that I was busy playing Dragon Age: Origins, but Wedding SOS was playing in the background. The missus is quite fond of Slice, you see, and I was in the market for another reason to hate the network that brings us The Biggest Loser, Rich Bride Poor Bride, Trading Spouses, and The Real Housewives of Orange County—her response was: "Shut up! She's a good wedding planner!")

This "renowned" iridologist certainly caught my attention, although the idea that anyone could be a renowned practitioner of a peculiar form of magical divination that few people have even heard of seems generally absurd. How did this esteemed medial practitioner proceed? I watched, gape-jawed, as she shone a bulky, blue dollar-store flashlight in the bride-to-be's eyes, then asked her to imagine herself walking around the room in another person's shoes. Granted, the segment was likely cut down for time, but it wasn't played for comic effect.

So, ridicule aside, what is the evidence for the efficacy of iridology as a medical or psychological diagnostic technique? Here it is:

Yup. You guessed it: nothing! Let's try to contain our amazement, shall we? Not only is there no prior plausibility (the visible characteristics of the iris are phenotypically determined, and "locked in" before birth; neither psychological nor physical maladies—the odd screwdriver jammed into the old eyeball aside—are likely to change them), but there is no evidence to support the claims of efficacy on the part of practitioners, either!

Is iridology impossible? Perhaps not. But it is ridiculous.


*While iridology may have been invented in the seventeenth century, it was popularised in the fifties, and it qualifies as "new age" in my book.

Posted at 23:41
Email ThisBlogThis!Share to TwitterShare to FacebookShare to Pinterest