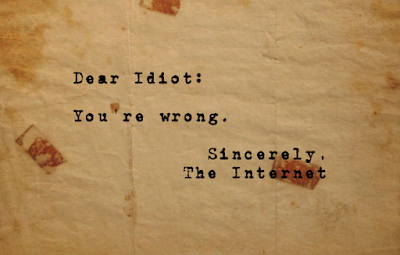 The absurdity of the article is apparent upon reading no further than the headline: A Plea to Atheists: Pedophilia Is Next On the Slippery Slope; Let Us Turn Back Before It Is Too Late. Looking beyond the title, you'll find the author, Rabbi Moshe Averick, bewailing the moral collapse of society, while attributing it to... guess who?

In my own lifetime I have witnessed radical societal swings in moral behavior and attitudes regarding marriage and sexuality, homosexuality, the killing of unborn children, euthanasia, and the use of illicit drugs.


Rights for gay people, women, and the terminally ill? How horrible! Quick! Someone fetch my fainting couch!

And how are atheists responding to his hysterics? Here the good rabbi waxes poetic:

Religious believers expressing dismay and horror at the ominous moral storm clouds looming on the horizon are met with smug derision, hysterical counter-accusations, or utter indifference. There is nothing that atheistic societies are incapable of rationalizing and accepting – including the sexual molestation of children.


Shaking my head in rueful amazement, I banged out a quick comment and left it at that. "Well, Mr. Averick," I said, "I think that 'smug derision' adequately captures my response to your article."

I didn't expect the good rabbi to reply.

It was not meant as a compliment. What I was trying to say is that instead of addressing the points and presenting coherent counter arguments, usually the response is ....like you said. I always welcome honest disagreement. Just present where you think my presentation was flawed.


Read the article for yourself. It contains so many false premises, logical fallacies, quote mines, and simple misstatements of fact that the mind boggles. For a person so clearly uneducated in moral philosophy to expound at length about the amorality of atheists is simply absurd.

This strikes me as somewhat akin to having a conversation with a creationist, or a geocentrist. Eventually you come to the conclusion that this person is either being disingenuous, or is so woefully ignorant that you'd have to dedicate a significant portion of your time to giving this person a remedial education.

And I'm not willing to waste my time.

Believe it or not, Rabbi, your authoritarian ethical system is not the only game in town—nor is it the best, by any stretch of the imagination. Perhaps you should have made an effort to educate yourself before you opened your mouth.

Luckily, most of the commenters get it right.

Addendum (12 September 2011): PZ Myers has weighed in with some worthwhile snark—and a little bit of substance, too.
Posted at 11:49
Email ThisBlogThis!Share to TwitterShare to FacebookShare to Pinterest