I started blogging about skepticism and atheism about two years ago, but I knew that I'd finally made it as a blogger when Dennis Markuze/David Mabus vomited his first bizarre stream-of-consciousness rant in the comments section.


Over the last year or so, I've received (and promptly deleted) several comments from Markuze, some making direct threats and all of them bizarre. It's worth noting that DM is single-handedly responsible for Startled Disbelief's Comment Policy.

Well, it appears that the Montréal Police Service is finally taking Markuze seriously. This is good news. CTV and the Toronto Sun (among others) are covering the story. If you want to learn more about DM, BreakingSpells.net has a fairly good rundown.

Update (17 August 2011): According to a tweet from the Montréal Police Service, "a suspect was arrested" in the case. 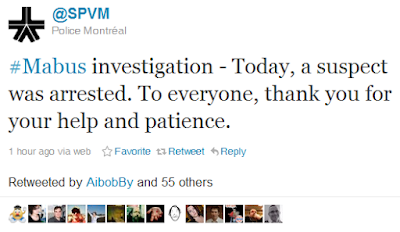 Jen at Blag Hag has more:

I'm going to assume it's Mabus, since he's been particularly quiet lately. Unless there's a surprise twist, and Mabus's mom was the one sending all of the threats. Or if the internet was directed by M. Night Shyamalan, Mabus is PZ Myers.

Posted at 18:00
Email ThisBlogThis!Share to TwitterShare to FacebookShare to Pinterest