I Get Mail: Creationism Edition!


I just received the following email from David Buckna, who I think is probably also the anonymous commenter from my previous post about creationism. [Edit: Nope, apparently it wasn't him.]

Subject: Evolution: The Creation Myth of Our Culture

Programmers utilized complex codes to create software. The genetic code, which is more sophisticated, controls the physical processes of life and is accompanied by elaborate transmission and duplication systems.

How does evolution, using natural processes and chance, solve the problem of complex information sequencing without intelligence?

My first question is this: In what way is the genetic code "more sophisticated" than, say, C++ or SmallTalk or Python or MATLAB? (Okay, I'll grant you MATLAB.)

The theory of evolution proposes that mutations (insertions, deletions, changes) to the genetic "code" are acted upon by natural selection. Those that are advantageous are more likely to be passed on to the next generation.

It's important to keep in mind that this code is does not constitute information in any abstract or absolute sense; it only constitutes a "code" in the context of the biological processes involved in reading and replicating it.

I recognise that Buckna's question was probably disingenuous: he's not looking for an answer; he's looking to play "stump the evolutionist". But it's possible that others may learn when proponents of science respond to his ramblings.

It's interesting to note that this is probably also the same creationist who attempted to insert his propaganda into Jeff Proling's Dinosauria On-Line. The story is enlightening. He's also been trolling PZ Myers and the folks at Radio Freethinker, so I'm in good company.

Addendum (11 July 2011): After the 40+ comments that this response has garnered so far, it occurs to me that I should make a few things clear.

The original question that was posed to me ("How does evolution, using natural processes and chance, solve the problem of complex information sequencing without intelligence?") should be better addressed to an evolutionary biologist. I briefly addressed some of the premises of Buckna's argument from the perspective of a software developer, but I'm no expert in evolution, nor have I ever claimed to be. It seems to me that the combination of random variation and selection adequately explains increasing information content over time (as can be trivially demonstrated via computer simulation).

But let's suppose for a moment that the answer was, "I don't know. I don't know how evolution accounts for that." So what? The argument "Since evolution can't explain X, creationism is true!" is fallacious. I'm told that there was a time before we understood how electrostatic discharges worked (although I wasn't there). However, to assert that since science couldn't explain lightning it therefore must have been a manifestation of Zeus' divine will would be to appeal to a god of the gaps.

If your only means of supporting your position is to attempt to poke holes in the position of your opponents, you demonstrate that your own position is untenable. Please present evidence for your position. 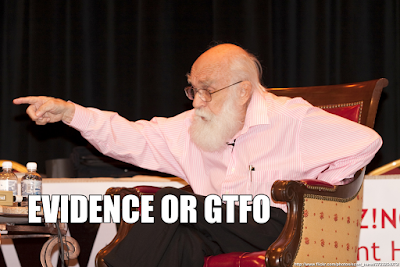 Posted at 12:29
Email ThisBlogThis!Share to TwitterShare to FacebookShare to Pinterest