The Humanist Association of Manitoba and the Winnipeg Skeptics were joint sponsors of an informational booth at the Red River Exhibition that ran 17–26 June 2011. Surrounded as we were by booths from the Gideons, the Winnipeg League for Life, the Church of Scientology, and folks hawking knock-off Power Balance wristbands, we called the booth "Escape to Reality".

I spent a fair portion of my free time over the last week staffing the booth (along with the indefatigable and demonstrably more dedicated Donna Harris and others), and generally had a lot of fun. We even got a shout-out from PZ, which is always appreciated. We had many enjoyable conversations with believers and skeptics of all stripes. 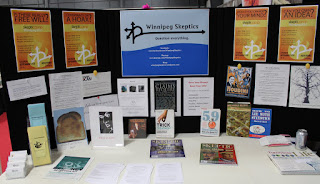 Donna, Laura, and I chatted at length with a few creationists, who were apparently offended that one of our signs put "Young Earth Creationism" in the same evidential category as "The Easter Bunny". When pressed, they could provide no positive evidence for their position, and seemed to forget several of their own talking points. Apparently there are no beneficial mutations, evolution cannot add information to the genome, and Darwinism predicts that species will just get stronger, smarter, and better over time, while we're clearly just getting sicker and sicker.

When I tried to explain that evolution only predicts increasing adaptation to the species' environment, I was smugly informed that I did not understand evolution. When I tried to explain precisely how mutations can add "information" in a genetic sequence, bringing up insertions, deletions, transpositions, and point mutations, I was met with blank stares. I pulled out a sheet of paper and wrote out some codons (ATG CTG TAG...), changing or crossing out letters to illustrate the replication or replacement of one or more nucleotides.

"I'm going to stop you there," one of the creationists said. "What are all those letters supposed to mean?"

Sorry, I thought, my mistake. I assumed that because you so arrogantly asserted that mutations were incapable of adding new information to a genome, you were at least passingly familiar with what "information" means in the context of genetics. I decided to cut my losses and move on.

There were times that they stumbled over their own talking points, which I found amusing. For example, they brought up Mount St. Helens several times, but couldn't seem to remember why it was so important for their case. I reminded them that Steven Austin had rock from a new lava flow at Mount St. Helens dated, and the potassium-argon dating showed the rock to be hundreds of thousands of years old—unfortunately, it is well established that Austin (either knowingly or in ignorance) used the incorrect radiometric dating methods. The various types of radiometric dating are accurate for varying (and overlapping) ranges of time. They are validated not only against each other, but also by other dating methods, such as dendrochronology, which uses tree rings.


Of course, the creationists weren't the only people we met whose beliefs took a sharp right turn when confronted with reality. A young woman who seemed very interested in our booth asked me, "Do you guys believe in energy?" "Sure!" I said. "Energy is the capacity of a system to perform work." She seemed a little nonplussed by this. "No," she said. "How we're all connected by energy. It's all about science. There's this movie you should see..." "Ah!" I said. "You're talking about What the Bleep Do We Know?." And then I told her, as gently as I could, precisely what I thought of that particular quantum fantasy film.

We spent much of our time at the Ex promoting SkeptiCamp Winnipeg, which is coming up on September 17th at Aqua Books, and the MASH Film Festival, on August 14th at the Park Theatre. Both events garnered a lot of interest.

We also did a few demonstrations. I'm told that the fellow hawking "Energy Balance" bracelets ($30 rubber bands—with "ions"!) threatened to call security on Ashlyn as she calmly explained to his marks how all of his tricks could easily be faked. Hypothetically, of course. She wasn't calling him a fraud. It's all about the consumer protection, folks! (Richard Saunders explains the tricks here.)

On Thursday night, Scott and I went to get "stress tests" at the Dianetics booth run by the Church of Scientology. There, we were asked personal questions while we held tin cans connected to a volt meter. I found that if you squeezed the cans, the needle would jump, which led to some amusing shenanigans.


There, we learned that L. Ron Hubbard had apparently been both a renowned physicist and a research psychologist. "Through his research," I was told, "he discovered that humans are spiritual beings." Fascinating! We were told that Scientologists were first responders in Haiti and Japan. "Oh," I said, "that's great! How did they help?" I was informed that these "first responders" were trained in Touch Assist, a form of energy healing.

The recruiters told Scott and I that one of the greatest boons that Dianetics has to offer is increased mental discipline and help to those who suffer from mental illness. "You know how Einstein said that you only use this much of your brain?" my recruiter said, holding her hands about an inch apart. "Well, with Dianetics..." She spread her arms wide, presumably indicating that Dianetics would allow me to meet my intellectual potential.

"So Dianetics is about mental health," I said slowly. "That's exactly right," she told me.

She stared at me as though I'd slapped her. Recovering quickly, she launched into a conspiracy-mongering diatribe about drug dependency and the Big Psychiatry smear campaign against the Church of Scientology. Scientologist successfully trolled. I'm such a bastard.

My favourite quotation of the night: "Dianetics is a science. It's like gravity. You can't disprove it." Fact.

A big thank-you to everyone who helped out with planning and staffing the booth, and to those who stopped by for a chat!
Posted at 20:00
Email ThisBlogThis!Share to TwitterShare to FacebookShare to Pinterest