The 10:23 Campaign took place this weekend, with events in seven Canadian cities and on every continent worldwide—and I mean every continent: I'm told that there was even participation at one of the Antarctic research stations! [Edit: Here's the link!] 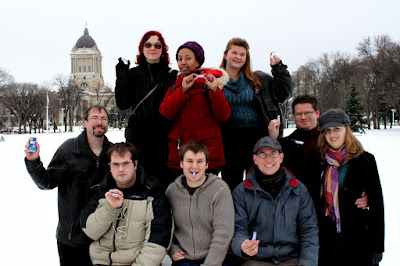 In Winnipeg, we had a modest turnout of ten skeptics; we had a few cancellations due to illness, despite event co-organiser Leslie Saunders' assurances that there would be copious quantities of Oscillococcinum available. Go figure.

When we arrived at Memorial Park, directly north of the Manitoba Legislative Building, we discovered that the snow was knee- (and in some cases, waist-) deep. Luckily Douglas had a shovel in his trunk, and Robert and I took it in turns to clear a path to our chosen area. 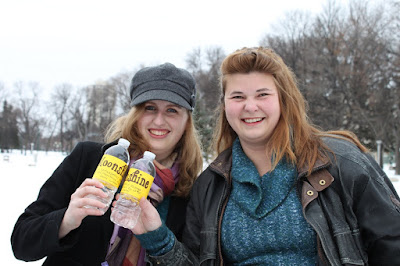 Richelle and Leslie with homeopathic moonshine, diluted to a very potent 60C.
Leslie supplied us all with "homeopathic moonshine", and Robert and Richelle were kind enough to furnish everyone with some hot coffee (thankfully, not diluted to homeopathic quantities). It was a balmy –2°C, but while the weather was mild the added warmth of the hot beverages was much appreciated. That, and I'm a coffee addict. 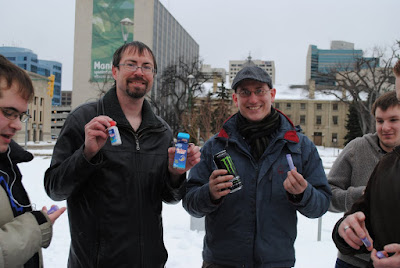 Douglas and Nathan with two varieties of homeopathic sleeping pills.
When 10:23 came around, the overdose began. Douglas and Nathan both downed bottles of homeopathic sleeping pills. Half an hour later, they were not even drowsy, although Nathan took his with a Monster Energy Drink: it was obviously this dangerous combination of uppers and downers that kept him going for the rest of the event.

I chose to take a 30C preparation of ignatia amara, a remedy that is meant to treat "intense grief, bereavement, and emotional shock"—and, if I'm reading this reference site correctly, also "shrivelled" genitals and "the plague". 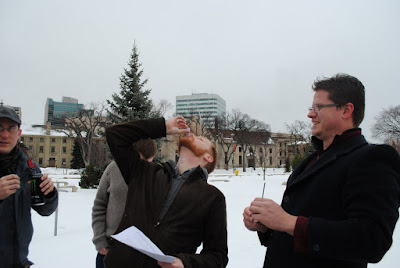 I down my bottle of ignatia amara, which is supposed to contain a deadly cocktail of strychnine and brucine.
Although we hadn't received responses to any of our media solicitations, we did have a fellow from CTV who showed up after the main event. Several of us were still chatting, and we were more than happy to do another overdose for the camera. Apparently we got some CTV News screen-time, which I missed. (But who watches the news?) You can find a very brief write-up of the story here.

Gem Newman, founder of the local group Winnipeg Skeptics, said that the protest was to put pressure on pharmacists and healthcare providers to ensure that products sold as medical treatments are effective.


That's actually a very fair summary of our position. I'm impressed! This isn't about telling people that they can't take homeopathic nostrums if they so desire—it's about raising awareness and educating the public so that they can make an informed choice.

Of course, the obligatory false balance was also present:

Homeopathic medicine has been practiced for over 200 years and has been proven in a clinical setting, he said.


Of course. It was never meant to be a "scientific test of homeopathic medicine". Those have been done, and, contrary to Mr. Belgaumkar's assertion, they show that homeopathy has no effect beyond placebo.* And I presume that you noted his worthless appeal to antiquity?

After the event, I was contacted by Rob Drinkwater, a reporter for the Canadian Press, and he conducted a telephone interview with me. I also put him in touch with Michael Kruse and Jonathan Abrams, who organised the Toronto and Ottawa demonstrations.

When the Canadian Press story eventually hit the news sites, I was disappointed by the factual inaccuracies it contained. Even after I walked Mr. Drinkwater through the homeopathic process and explained that the preparations (despite their labels) contained nothing but sugar and lactose, the story implied that the "remedies" were herbal in nature.

Skeptics of homeopathic medicine have downed entire bottles of the remedies at demonstrations in several Canadian cities in an effort to prove the concoctions don't work.

Gem Newman, who consumed a whole bottle of St. John's Wort at an event in Winnipeg, says the capsules were mostly comprised of sugar and water and didn't affect him.


Again, we weren't trying to "prove the concoctions don't work": we're trying to raise public awareness of this fact. The scientific legwork has already been done, but public perception of these nostrums is lagging behind.

Nitpick Warning: I did not consume a bottle of St. John's Wort! I did not even consume something labelled St. John's Wort. I was planning to take hypericum perforatum myself, but its claims to cure puncture wounds, crushed fingers, and lockjaw made it popular enough that I gave it away to another enthusiastic skeptic.

So, the lesson here is that dealing with the media is a recipe for frustration.

On a lighter note, did anyone else notice that "Drinkwater" has to be the greatest possible name for a reporter doing a story on homeopathy ever?

In the interest of avoiding facepalms, I suggest steering clear of the comments section on the Winnipeg Free Press site. It's full of the standard "Big Pharma" conspiracy-mongering, naturalistic fallacies, appeals to consumer freedom, anti-vaccine kookery, and simple misunderstandings of what homeopathy actually is. The comments probably shouldn't be taken as representative, however: the alt. med. crowd is really good at mobilizing the troops.

IMO, the people who pulled this little media stunt are big pharma insiders out to discredit natural medicine. It's all part of the plan to remove natural products from the shelves... they don't even deny it.


Exactly right! Because the only way someone could possibly disagree with you is if they were paid off.

Even so, there were some glimmers of hope. My wife went through the comments and picked out some winners.

Good and innocent people (though not many smart people) quite often die from taking homeopathic remedies instead of medicine. THIS is the issue. You need not bow down to big pharma, but don't bow down to homeopathy either. It's so much dumber.

Many, perhaps most "remedies" contain not a single molecule of the active "ingredient" (it's not an ingredient if there isn't any of it present, DUH!) because they are diluted by a factor of 10 to the power of 60 (that's a 1 with SIXTY zeroes after it!). Further claims are even more ridiculous than that one - that the remaining dilutant (usually water or alcohol) retains an "impression" of the diluted substance (which is no long even present). This is, unfortunately, in opposition to all known science.

Big pharma will stop at nothing. [Homeopaths] will stop at even less. Do your own research, and remember that keeping an open mind includes being open to the idea that homeopathy may not be good for you. Weigh the evidence, especially if you or a loved one are ill, even more especially if it is a serious illness that is known to be curable or treatable by other methods than homeopathy.


And how about this one, responding to some anti-vax claims?

People used to die of pneumonia, whooping cough and the COMMON COLD in outrageous numbers but improvements in our understanding of modern medicine (including sanitation) have improved survivabilty of disease. The best that homeopathy can give you is improved hydration.

I believe that this one was posted by Richelle, and it nicely sums up our position:

We don't want to take away people's rights to free choice. What we do want to see is people be aware of what they're throwing their money away on. It is a scam. Imagine if a "Big Pharma" company swapped out their drugs for something that didn't work, had been proven not to work, and sold it for a jacked up price to an innocent public!


This whole campaign is about choice: it's about informed choice. As things stand, it's incredibly difficult for people to make informed choices, because misinformation abounds. This is easily illustrated by the fact that neither the reporter nor the commenters seem to understand that homeopathy ≠ herbal remedies.

[Homeopathy] is every bit as valid as horoscopes and healing crystals! I can't understand how these people can protest such important treatments. 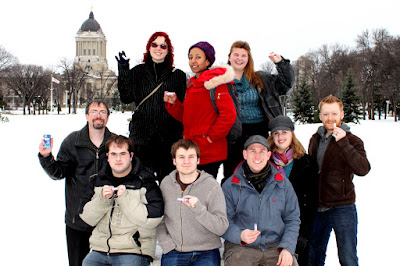 Homeopathy: there's nothing in it.

I just want to finish up with a brief note about placebos. Someone suggested on Facebook today that even if homeopathy is nothing but placebo, placebos have been proven to work.

This is not true.

Placebo is "effective" in roughly 30% of cases, and only for symptoms with a high psychological overlay (e.g., pain or nausea), and it isn't clear whether people are perceiving less pain or if they are simply reporting less pain. Objective outcomes are not affected by placebo.

When placebos seem to affect objective outcomes, this effect occurs in the form of regression to the mean (when symptoms are at their worst, they tend to improve a little). When a patient seems to get better, it can also be due to the natural history of the disease (many diseases—colds, flus, etc.—get better on their own). Throw in a little confirmation bias for good measure, and the "placebo effect" isn't much of an effect at all.

Many folks think that it's "mind over matter". It isn't. Placebos aren't used because they work, they're used because they're necessary to maintain blinding procedures in clinical trials, which prevents bias in patient, practitioner, and analyst. (But don't take my word for it! For more information from an actual medical doctor and infectious disease specialist, see episode 5 of QuackCast.)

And don't forget: with real medicines you get a placebo effect on top of a real medical intervention. Bonus!

I probably should have prefaced this with "TL; DR". Ah, well.

* From the conclusion of a recent systematic review of 110 placebo-controlled trials: "when analyses were restricted to large trials of higher quality there was no convincing evidence that homeopathy was superior to placebo."