We recently received the following message at the Winnipeg Skeptics blog:

Hello,
This message is for Gem Newman.

Firstly, after reading about your visit to the Winnipeg creation museum I was impressed with your respectful critique of the ideas and artifacts presented. John Feakes had mentioned to me that you had recently taken a tour. I also appreciated after reading some of your other articles (and the Free Press article), your sincerity in discovering what is true rather than simply argueing against something for the sake of arguing. It also appears that you are no longer sceptical about evolution and that leads me to a request I hope you consider.

I am a part of the Manitoba Association of Christian Home Schoolers(www.machs.mb.ca). Each year we have a conference that has a youth (ages 12 – 18) trak which runs Friday afternoon and Saturday. This year we are thinking of perhaps having a creation/evolution presentation/dabate on the Friday evening March 25th from 7 til 9pm at Calvary Temple on Hargrave. John Feakes would most likely be the presenter for creation. The format would be that each person would have a 10 minute introduction, a 10 minute questioning/clarification of the other perspective and a 10 minute closing. Perhaps we would schedule a question time from the youth as well. Handouts would probably be a good idea. The goal is not so much to have a “winner/loser” but to have the evidences of each idea presented in a clear and concise manner.

This is in the planning stages so any changes or requests you might have would be welcome.

Let me know what you think and if you would be interested in being the presenter for evolution. If there is someone else you would like to suggest please do.

Thank you for considering this request and please let me know one way or the other by email [REDACTED] or phone [REDACTED].


P.Z. Myers recently linked to an excellent and comprehensive guide to such debates, from AtheismResource.com: 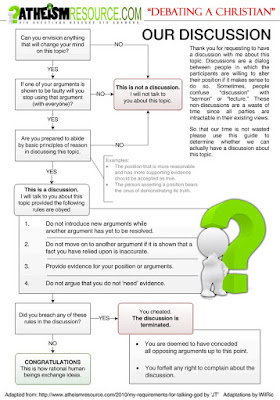 Here is my reply.

Thank you for your inquiry. First of all, let me be clear: I am speaking only on my own behalf, and my remarks should not be taken as representative of the views of other members of the Winnipeg Skeptics.

You may be disappointed to learn that I am not willing to participate in a debate on the subject of evolution. Although I applaud your apparent willingness to expose the young people in your care to new ideas (something that I don't imagine they get very often), I believe that the proposed format would be inadequate for several reasons.

First of all, despite any gratification that I may have felt at being asked to present the evidence for evolution, I am a very poor choice. Much like Mr. Feakes, I am completely unqualified to speak publicly on the subject of evolution.

I find it troubling that, rather than contact an expert in the appropriate field—an evolutionary biologist, say, or perhaps even a palaeontologist—you chose to contact a computer scientist. That seems vaguely like stacking the deck. I am merely an interested layman and a science enthusiast. I would recommend contacting faculty members at the local universities in search of an appropriate speaker.

Second, a debate is not an appropriate format for discussing matters of science. Debates are more about scoring rhetorical points than about getting to the truth. It often takes far more time to refute a falsehood than it does to state it, and in cases where one participant uses a rapid-fire approach to present his or her arguments it can often take several minutes for his or her opponent to thoroughly address each piece of misinformation. This provides a significant handicap for any participant who is beholden to the truth. As Samuel Clemens is purported to have said, "A lie can travel halfway around the world while the truth is still putting on its shoes."

Third, to present creationism and evolution in such a manner is to promote a false equivalence. Evolution is a well-vetted scientific theory which makes testable predictions and is the basis for much of modern biology and medicine. It is independently validated by several fields of science, including (but not limited to) archaeology, geology, and genetics. Creationism, on the other hand, is an unfalsifiable religious position that ignores scientific evidence to advance a regressive, anti-intellectual agenda. It has yet to make any testable predictions that I'm aware of, and is scientifically worthless. I have no interest in legitimising the manufactured "controversy" between evolution and creationism any more than I have in legitimising the "controversy" between astronomy and astrology.

I was disappointed when you contended that I was "no longer sceptical about evolution", because this statement implies a serious misunderstanding of scientific skepticism. Modern skepticism is not simply doubt. When I talk about skepticism, I'm not talking about a position: I'm talking about a method which evaluates claims on the basis of their logical structure, their plausibility, their falsifiability, and the quality of the available evidence.

With this in mind, then, you may wonder why The Winnipeg Skeptics visited Mr. Feakes' museum last year. We were honestly interested in discovering why Mr. Feakes and his people think the way that they do. Some of us visited a psychic fair last spring for a similar reason. Speaking for myself, I was not unwilling to be persuaded by what Mr. Feakes had to say, but I judged that outcome to be unlikely. I was also prepared to be convinced of the existence of psychic phenomena upon visiting the psychic fair, but was quickly disabused of the notion upon my arrival.

But in science, all conclusions are provisional.

In 1965, Sir Austin Bradford Hill wrote: "All scientific work is incomplete—whether it be observational or experimental. All scientific work is liable to be upset or modified by advancing knowledge. That does not confer upon us a freedom to ignore the knowledge we already have or postpone the action that it appears to demand at a given time."

It is possible that the current theory of evolution does not provide a complete picture of the origin of species. But, as Stephen Jay Gould said, "In science, 'fact' can only mean 'confirmed to such a degree that it would be perverse to withhold provisional assent.' I suppose that apples might start to rise tomorrow, but the possibility does not merit equal time in physics classrooms."

And finally, let me be clear: I have absolutely no respect for creationism or for any concomitant dogmas. Please don't confuse politeness with respect. Although I believe that all people are deserving of respect, my respect for ideas is limited to those that have proven themselves worthy of such esteem.

Posted at 20:33
Email ThisBlogThis!Share to TwitterShare to FacebookShare to Pinterest