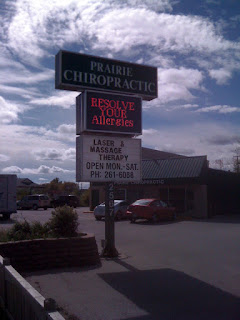 Spinal manipulation cures allergies. Who knew? D.D. Palmer, that's who!
I've touched very briefly on chiropractic before, but a minor debacle on the grand old book of faces has briefly renewed my interest.

A skeptical friend of mine recently posted that he was disturbed by a friend's status update, which described taking children to visit a chiropractor. This apparently cured them of "bed wetting, asthma, and a laundry list of other ailments."

Although he received some agreement from a few of his friends, several were fairly upset by his comment. In an unusual display of restraint, I will avoid directly quoting from Facebook in a vain attempt to avoid pissing anyone off. I'll summarise, instead:

Gem: Regarding: "...they generally up-play the good results and majorly downplay the adverse effects..." It's true that this is a major problem. The file-drawer effect refers to the predilection to ignore (and not publish) the results of a study that doesn't say what you wanted it to say. This is a problem with pharmaceutical companies, and it's why there is currently a push to have all medical trials registered before they begin, so that the public can see when a company tries to bury the data. I find no reason to believe that a large corporation will behave ethically without strict oversight and regulation... At the same time, publication bias is also rampant among alt-med practitioners.

Gem: Cervical spinal manipulation has been shown in several studies to increase the prevalence of strokes: http://www.ncbi.nlm.nih.gov/pubmed/17330693?ordinalpos=4&itool=EntrezSystem2.PEntrez.Pubmed.Pubmed_ResultsPanel.Pubmed_RVDocSum

Granted, that is not several studies: it is one study. Here are some more:


I'm not cherry-picking, here. One of those four studies concluded: "The best evidence suggests that chiropractic care is a useful therapy for subjects with neck or low-back pain for which the risks of serious adverse events should be considered negligible." I found myself wondering (perhaps unfairly) whether it had been carried out by a chiropractor. It had. Unfortunately, I am unable (and, frankly, unqualified) to assess the study's strengths and weaknesses.

There are others; I simply picked the first four that came up on PubMed. Just search PubMed or any similar database.

Gem: Chiropractic is simply not an evidence-based practice (although a very small number of practitioners are working to change that). The core tenets of chiropractic dictate that subluxations disrupt the flow of "innate intelligence" (a prescientific vitalistic force that has never been demonstrated). British journalist Simon Singh was sued in 2008 by the British Chiropractic Association for libel, after he called their treatments "bogus". You can find his article, with citations added, here: http://gimpyblog.wordpress.com/2008/08/17/the-libellous-simon-singh-article-on-chiropractors/. It's a short read, but quite good. As Professor Frank Frizelle quipped, "Let's hear your evidence not your legal muscle." The BCA dropped the suit when it became clear that their claims were untenable.

This post caused one of the proponents of chiropractic to rail against drugs and unnecessary surgery (stating that they "do more harm every day!!!"). This person went on to state that "tons of research" had been and continued to be done into the efficacy of chiropractic.

‎Gem:"Unnecessary surgery" is by its very definition not necessary, and so I won't argue that it doesn't do more harm than good. As far as drugs go, saying that they "do more harm every day!!!" is not a useful statement. Water does more harm every day: people drown in it, people slip and hurt themselves, etc. That doesn't make water inherently bad. If chiropractors want to syphon their money into more research, they're more than welcome to it—but they've had a hundred years to turn up evidence for efficacy, and on almost all of their claims the evidence has been negative. We shouldn't be wasting public funds on it, of that I am convinced.

At this point it was revealed that the person with whom I was arguing was a former chiropractor, who went on to make my points for me. Before leaving the conversation (presumably in disgust), the chiropractor said two things of interest:


This person then stated, "I need a drink...", and was never seen by any hobbit in Hobbiton again.

Gem: I agree. That's why it's important to look at systematic reviews of the research, rather than simply cherry-picking studies that agree with you. If you do twenty studies with a p-value of 0.05, by chance alone you would expect one of them to be a false-positive or false-negative. The it-works-if-you-believe-in-it approach seems fairly consistent with the placebo effect (although there is weak evidence for efficacy for some lower back pain). I'd rather have a treatment that works consistently.

Then a new voice chimed in. This person was of the opinion that "there is merit [to] some chiropractors", but was not convinced by claims that they could treat asthma, renal failure, autoimmune diseases, or infections. "Evidence-based practice does not demonstrate statistical proof that Vertebral subluxation [treatment] is an effective treatment." The newcomer claims that "spinal alignment without massage is useless" (necessitating repeat visits for readjustment) and states that more research is needed, before linking to two Cochrane Collaboration reviews: one on alt-med treatments for bedwetting and another on the subject of chiropractic treatment for lower-back pain. We are left with this quotation from Edzard Ernst's critical evaluation of chiropractic:

With the possible exception of back pain, chiropractic spinal manipulation has not been shown to be effective for any medical condition.

Gem: From what I've read, the very existence of subluxations is in question. Even the General Chiropractic Council (UK) has stated (http://www.chiroaccess.com/News/Claims-of-Subluxation-Causing-Disease-Prohibited-in-Great-Britain.aspx?id=0000165):

"The chiropractic vertebral subluxation complex is an historical concept but it remains a theoretical model. It is not supported by any clinical research evidence that would allow claims to be made that it is the cause of disease or health concerns."

And what is a subluxation?


The thing is, chiropractic is alt-med (or SCAM*, if you prefer). That doesn't mean that it "doesn't work" (although what exactly "work" means in this context is often quite difficult to define). But it does mean that it isn't beholden to any real standard of care. Often science-based medicine is perceived as the enemy, and consequently chiropractors seem to have a penchant for bundling various other unscientific modalities into their practice. This is highlighted best, I think, by a sign advertising for a chiropractic clinic that was erected two years ago near my office. At the time it read:

Did Jesus or Moses get the flu vaccine? Then why should you?


I'll let you pick that apart at your leisure.

* Supplementary, Complementary, and Alternative Medicine
Posted at 10:38
Email ThisBlogThis!Share to TwitterShare to FacebookShare to Pinterest