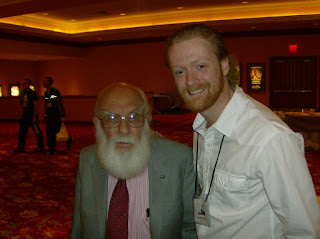 These posts are compiled from notes taken on my iPhone during the presentations. I am now turning the screen brightness on the device way down in the hopes that its battery will make it though the day.

It looks like they'll be talking about Johnny Carson and how influential he was in the United States and abroad. Randi was on the show a total of twenty-two times. During the presentation, many old clips of Randi and Carson are aired.

Randi tells us that Johnny had a habit of sitting outside the studio in his white Corvette after the show, and as Randi exited Johnny would call him over. The two of them would sit in Johnny's car while the TV host smoked cigarette after cigarette, and they would talk.

Carson had a policy of never meeting with guests before they appeared together on-screen—but he constantly broke this rule for Randi. Johnny always had another question for him.

Randi got a call from Carson's show one day, asking him to appear on the show that night. Uri Geller would be a guest on The Tonight Show, and they wanted Randi to replicate or explain some of his parlour tricks. Randi, not wanting to tip off Geller, instead asked to speak to the prop master, who told him what was up.

Geller had requested several silver spoons and plastic film cannisters. Randi told the prop master to scotch tape the spoons to their tray and to put rubber cement on the bottom of the film cannisters.

Although Geller's dubious ability to bend spoons and keys using the power of his mind (in addition to the power of his hands) has been discussed in detail, the film cannisters were a fairly new trick: apparently several were to be presented to Geller, sealed, on a tray, one of them containing a small object. Geller would then lift the tray, and by surreptitiously observing the ways in which the cannisters slid slightly as he lifted it, he could determine which were empty and which contained hidden items. However, applying rubber cement to the bottom of the cannisters would greatly increase their coefficients of friction, preventing them from sliding and revealing the location of the hidden object.

The prop master did as Randi recommended, and Geller spent some eighteen minutes floundering before eventually giving up.

Randi went to see Peter Popoff at one of his many faith healing performances, and together with Banachek they discovered his trick: his wife was backstage transmitting via radio all of the relevant details about each audience member. They taped everything. Johnny Carson's producer bumped a few actresses, and allowed Randi to surprise the host with the stunning reveal.

During the discussion, Randi reveals that Johnny Carson was a heavy contributor to the JREF—he would frequently mail Randi letters containing short notes and cheques for $100,000. Randi relates that Penn Jilette once donated $50,000 on a humongous ten-foot cheque, saying that he wanted to be half the man that Johnny Carson was; much hilarity ensued when Randi went to the bank attempting to cash it.

The presentation ends with a clip of Randi performing psychic surgery on The Tonight Show.

"No, that doesn't come out!"
Posted at 14:29
Email ThisBlogThis!Share to TwitterShare to FacebookShare to Pinterest