This is the first in a series of posts discussing The Amaz!ng Meeting 8, which took place at South Point Hotel and Casino in Las Vegas, Nevada, 8–11 July 2010. You can find the next post here.

This was my first Amaz!ng Meeting. In case you're not familiar with TAM, here's the descriptive blurb from randi.org:

The Amaz!ng Meeting is a celebration of critical thinking and skepticism sponsored by the James Randi Educational Foundation. Thinking people travel the world to share learning, laughs and life with fellow skeptics and distinguished guest speakers.

At the conference, I met quite a few entirely awesome people, including James Randi (of the James Randi Education Foundation), Adam Savage (of Mythbusters), Phil Plait (of Bad Astronomy and the forthcoming Discovery Channel hit Phil Plait's Bad Universe), Steven Novella (of The Skeptics' Guide to the Universe and Science-Based Medicine), Bob Novella (also of the SGU), Brian Dunning (of Skeptoid and inFact), Jen McCreight (of Blag Hag), and D.J. Grothe (president of the JREF and host of For Good Reason).

I even met Scott Carnegie, a member of the Winnipeg Skeptics. You'd think that, being the organiser of the Winnipeg Skeptics myself, I would have met the guy before now. But apparently not. He also filmed me meeting James Randi, embarrassingly enough. (I assure you that before the camera was turned on, Randi and I had a deep philosophical discussion on the nature of skepticism 'round the world. And on the use of Photoshop.) I got Scott back, though, holding the camera while he had a much more substantive conversation with Phil Plait.

It was fantastic to meet so many influential people in the skeptic movement. Without exception, they were gracious, friendly, and approachable. D.J. Grothe was even fairly tolerant of me when I hounded him for a quick word and a photo while he was rushing through the halls of South Point, obviously hurrying to deal with some problem or other. 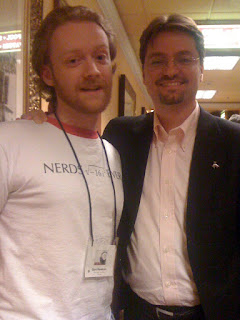 I actually felt quite bad about it, because I really didn't want to interrupt the guy—who was, in retrospect, obviously busy. I think that I also may have interrupted his conversation with Paul Kurtz! I approached him later on in the conference to apologise. He was very friendly. "Hey, don't worry about it," he told me. "We're all family."
Posted at 12:52
Email ThisBlogThis!Share to TwitterShare to FacebookShare to Pinterest