In case you missed part one, you can find it here.

On the lower floor of the church was housed a rag-tag assembly of quacks and pseudoscientists: herbalists, "certified nutritional consultants", naturopaths, and "lightworkers". We all found it highly entertaining.

Why is it that quacks and cranks tend to cluster? Why do you find chiropractors prescribing homeopathic remedies? Why do people who claim to be telepathic always end up contacting either aliens or ghosts? Is it some sort of safety in numbers? Do they feel kinship with others who think that the real world is just a little too real?

Just a few reminders about alternative medicine and certification, before we delve further:


Now that we have that out of the way... Parasites! 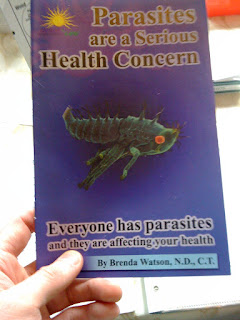 Wow, that certainly is an angry looking parasite! But not to worry, Brenda has a solution for you: diet! Apparently we're not eating "naturally" enough. If you don't recognise that fallacy by now, there's really not much that I can say.

Speaking of eating natural, did you know that aspartame will kill you? Brian Dunning did a fun Skeptoid episode on this one. Don't get me wrong, aspartame is awful; the aftertaste is just horrific. I coined a neologism for non-sugar sweeteners (I don't say "artificial" sweeteners because stevia also tastes terrible, in my opinion): "aspartaste". This term has become quite popular around my office.

But back to aspartame. Apparently this noxious substance breaks down into formaldehyde when digested. Ridiculous? Careful! Let's not get reflexively dismissive! The missus pointed out that this claim is, in fact, correct. And irrelevant. Formaldehyde is produced in small quantities during protein metabolism, and aspartame is a protein.

Formaldehyde is a naturally occurring compound, present in most living organisms as an intermediate in the production of some essential chemicals (e.g. some amino acids, lipids) and a natural biological breakdown product of amino acids.

Formaldehyde is considered safe, as it is an essential intermediate in the synthesis of DNA and amino acids. Humans have approximately 2.5 μg/mL of formaldehyde in their blood.

That's not to say that you should go out and drink formaldehyde solution! That would be stupid. It is safe in small quantities, and the amount produced during protein metabolism is minuscule.

I don't have a lot to say here—with the exception of this: "Don't take medical advice from people who don't have the requisite training to dispense that advice."

In many places, naturopaths are classified as "doctors" (Maine, for example, and some parts of Canada), and can even prescribe certain medications (notably in BC, and soon in Ontario). For the purposes of licensure, naturopaths are required to obtain a certain level of education. I will quote from the website of the Naturopathic Medicine Council of Canada:

The education of naturopathic doctors (NDs) follows a path similar to that of medical doctors (MDs). Applicants enter naturopathic medical school after receiving a baccalaureate degree (usually pre-med) from a four-year college. Students complete two years of post-graduate basic science coursework then have two to three years of didactic and clinical training, including time spent in supervised patient care.

Unforunately, naturopaths are quacks. I have never encountered a naturopath, either in person or online, who was not a dedicated ideologue. (But please don't take that blatant argument from personal experience as evidence!) Although they are subject to examination and evaluation as students, they are trained in a seemingly endless variety of discredited, anti-scientific modalities:

Wow! We've discussed homeopathy before. Hydrotherapy is tough, because it is not very well defined and can serve as a label for just about any therapy, scientific or no, involving water. Certain beneficial exercise routines can be classified as hydrotherapeutic, but so can the phony water-cures that have been peddled for centuries (of which Charles Darwin was an unfortunate devotee). And mind-body medicine? That seems to carry the unfortunate (and unfounded) implication that the mind is in some way separate from the body. I've touched on this tangentially before:

Problems such as how the spirit communicates with the brain, what functions it performs that the brain cannot account for alone, why the spirit seems to be impaired in so many ways by brain injury, and the like, are joined by questions such as: ... How does an immaterial spirit interact with or affect the material world? (If it can affect the material world, why does an embodied spirit control its host via the brain? Why not control its appendages directly?)

For a lovely and concise dissection of dualism's various shortcomings, look here.

But I have digressed long enough.

Now we come to the Soma Board. This "food energiser" is, according to the pamplet, based upon "pyramid technology" (sans the pyramids, from what I can tell). Using a special blend of herbs and spices (wait, where have I heard that before?), the Soma Board is apparently able to increase the nutritional value of food, eliminate harmful bacteria, and even remove pesticide from your produce. I proposed buying one and placing some ground beef on it for several weeks, to see if its magical anti-microbial action would prevent decay, but my wife didn't want to shell out $30 for science. Or maybe it was the smell. 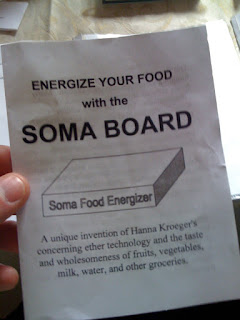 I don't even have enough space on my counter for appliances that actually do something.
Customers are instructed not to wash the Soma Board. I'd imagine you're not supposed to submerge it in water because the manufacturers didn't want to spend any extra money on waterproofing the thing, and the herbs inside would soak, expand, and eventually grow mould. Nutrient-rich mould, to be sure.

As an aside, Hanna Kroeger's invention purports to use "ether technology". Presumably this refers to the class of organic compounds, but the link is tenuous at best. It could also refer to technology derived from the various aether theories, technology related to the quintessence, or the anti-gravity technology described by Rho Sigma (presumably a pseudonym) in the 1977 (1996?) book Ether-Technology: A Rational Approach to Gravity Control:

Since an understanding of related UFO observations seems essential in any investigation of new energies and gravity-technologies, one chapter in the forthcoming second book of this study series will present an overview of the observed propulsion aspects of UFO's and the macabre history of the official handling of the problem which will give the reader an appreciation of the calibre of the people involved and the thoughts which have gone into the investigation of the UFO enigma and related energy problems generally.

Tune in next time for a play-by-play of my very own psychic reading!

Bonus: If you want to read a brilliant takedown of a "medical intuitive", read Orac's post on Andreas Moritz.

Special thanks to my wife on this one. Love you, Hon.
Posted at 22:50
Email ThisBlogThis!Share to TwitterShare to FacebookShare to Pinterest