One of the joys of living in Canada is that our government doesn't do everything in its power to prevent students from learning about human sexuality. I'm sure that some parents are now, more than ever, wishing that it did.

So, the Middlesex-London Health Unit in Ontario has put together a computer game that aims to teach high school kids about safe sex. As we are all no doubt aware, educational computer games tend to suck (classics like Number Munchers and Crosscountry Canada aside). Also, adults seem to have a difficult time relating to younger audiences—often hilariously so. But this takes the cake. It is called Adventures in Sex City.

The Characters
In this educational game (designed with high school kids in mind, remember), you play as one of four members of the elite Sex Squad: Wonder Vag ("promotes abstinence until marriage"), Willie the Kid ("massive rock hard strength"), Power Pap ("a strong believer in getting tested"), or Captain Condom ("when used correctly is 98 percent effective"). Your adversary? The Sperminator, a flying burly white guy in a Speedo and Mexican wrestling mask, with two giant penises* for arms. His stated goal is to "infect everyone with his evil sperm".

Gameplay
This is a quiz game. Each round, you are asked a true-or-false question. If you get the answer wrong, The Sperminator spews STI-infected sperm onto your character, causing your character to utter phrases such as "Eww, that's sticky!" or "Aagh, right in the face!". Again, I can't stress this enough: I am not joking. 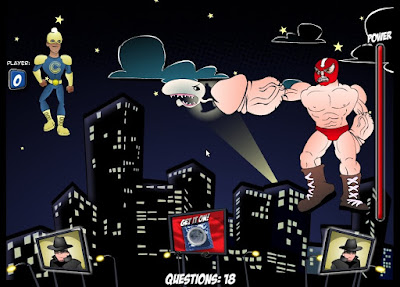 It doesn't look like Captain Condom will prepare his prophylactic in time.
Let's be clear: I'm not against a game like this in theory. Games can be wonderful learning tools. That said, this isn't really a game. It's a true-or-false sex-ed exam with a really bizarre hook. I'm sure that's the point: the designers want it to be so over-the-top ridiculous that people are clamouring to play it even though it's a terrible game—and in playing it, these people might actually learn something. As terrible as the game is, I'm convinced that it will likely accomplish its goal. 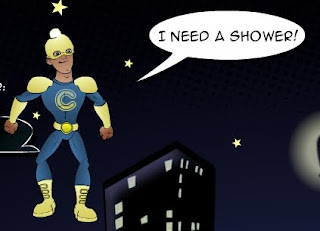 Me too, big guy. Me too.
In case you missed the link above, the game is embedded in an article here, and here is a direct link to the .SWF file.

* I maintain that the etymologically correct plural of "penis" is "penes". (Similarly, "gymnasia" and "octopodes". Yes, I'm a pedant.) I use the more common "penises" here so that the verbiage won't distract you from the main point: the guy has genitalia for arms!

Edit: Blag Hag also has some interesting thoughts on, among other things, the subject of vilifying those infected with STIs. Check it out!
Posted at 02:25
Email ThisBlogThis!Share to TwitterShare to FacebookShare to Pinterest