...to make way for Big Sunscreen!

I've got a hankering for front-page news, and I can't seem to find my copy of the LA Times, the Washington Post, or even the Winnipeg Free Press. I guess I'll just have to settle for my trusty copy of the Fabutan Observer! 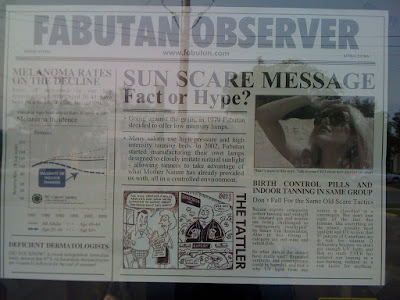 Wow! Fabutan has their own newspaper? Cool! Let's take a closer look, shall we?

MELANOMA RATES ON THE DECLINE

Rates of melanoma in our key demographic, females aged 20–44, have been on a steady decline since 1980.


In case you're interested, I managed to track down the source of the graph that they use. You can find it here. While the graph is reproduced faithfully, the corresponding graph for males is missing (it isn't their key demographic). Here it is: 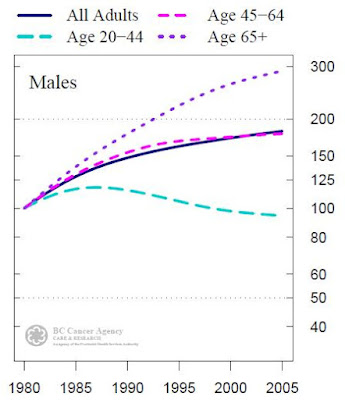 I was unable to find statistics that either validate or dispute their assertion that the majority of indoor tanners are aged 20 – 44, but it seems reasonable. I was able to find a study that seems to verify that the majority of tanners are female, but it is a pediatric study. Looking at both male and female trend lines for all adults, however, we see neither a marked upward or downward trend in the incidence of melanoma in females, while it's easy to make out the upward trend in the male population.

Also, melanoma is not the only variety of cancer caused by exposure to ultraviolet radiation.

Regardless, there is no data available that lets us separate those who make use of indoor tanning beds from those who do not. Personally, I would hypothesize that any decrease in melanoma incidence may be related to increased sunscreen use, which is of course not used in the tanning bed. Let's move on.

DID YOU KNOW? A recent independent Australian study showed that 87% of Australian dermatologists are vitamin D deficient by the end of summer?


I still don't! But seriously, dermatologists not getting enough vitamin D? Shouldn't they know better?

Perhaps that's why they're not getting enough vitamin D. We're given no information with regard to how deficient they are, only that they are deficient. It's possible that their alleged vitamin D deficiency could be explained by the fact that, as dermatologists, they are intimately familiar with the dangers of over-exposure to ultraviolet radiation. I briefly considered the possibility that Australian foods were not fortified with vitamin D, but it would seem that they have similar voluntary fortification programs for dairy products, and indeed have a mandatory vitamin D fortification requirement for margarine, which we lack in North America.

SUN SCARE MESSAGE
Fact or Hype?
...
In 2002, Fabutan started manufacturing their own lamps designed to closely imitate natural sunlight – allowing tanners to take advantage of what Mother Nature has already provided us with, all in a controlled environment.


Well golly-gee, that sounds great! I truly adore the naturalistic fallacy [edit: appeal to nature]! Will Fabutan also provide us with a way to get the arsenic and earthquakes that Mother Nature has already provided us with, too!

And now for the best part: 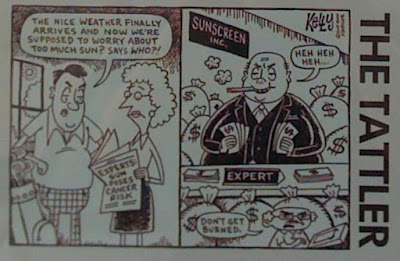 Why should you tan? Because Big Sunscreen doesn't want you to! I feel the need to mention that I didn't just make this up. These photographs were not doctored in any way. That's the sad part. The sad, sad, hilarious part. I assume that I don't even need to mention that Fabutan is also trying to make money, here. But I did mention it, didn't I?


Uh, what? Non sequitur, much? I really don't know what to say to this. Nothing in the "article" below this headline says anything about birth control pills. Am I missing something? My sanity, perhaps?

Recent reports comparing indoor tanning and sunlight to mustard gas and arsenic are being challenged as "outrageously overhyped" by Smart Tan Association.


Oh, these allegations are being challenged by the Smart Tan Association? That sounds like a perfectly objective consumer advocacy group with the best interests of the public at heart. Oh wait, they're actually an indoor tanning lobby group and "business solution provider"? Who would have guessed?

And now for the actual science, straight from the Canadian Cancer Society:

There’s no safe way to get a tan. Just like the sun, tanning beds and sun lamps release ultraviolet (UV) rays that trigger the tanning process in the skin.

This causes skin damage, such as sunburns, premature aging and cataracts.

Also, long-term exposure to UV rays, sunburns either from the sun’s rays, tanning beds or sun lamps, can put you at greater risk for non-melanoma or melanoma skin cancers.


And here's an excerpt from their list of tanning myths:

Having a tan is healthy
No it’s not. It might make you feel good but when your skin colour changes, you’re damaging your skin and that can lead to premature aging and skin cancer. If you have to have that tan, try asunless tanning cream. It will last about a week. Just remember that when you’re using a fake tanning product, you’ll still need your sunscreen.

My tan protects me from the sun
I don’t think so! A tan offers very limited protection from sunlight or burning. Some tanning beds can expose you to five times as much radiation as the sun. So it’s definitely not a reason to be spending time in a tanning salon.

I’ll get my vitamin D by going to the tanning salon
You could but you don’t need that much exposure to UV rays. A few minutes a day of unprotected sun exposure is usually all that is needed for people to get enough vitamin D. For most people a little sunlight goes a long way. In the fall and winter, a supplement is a much safer and cheaper way to get your vitamin D.


This Fabutan advertisement is neither more nor less than a sad propaganda piece. Shame on you, Fabutan.

But seriously, watch out for Big Sunscreen: they're out to make a buck, and they don't care who they hurt!


Edit: This issue proved contentious. In the interest of transparency, I have left this post unaltered (with the exception of this addendum), but you can find the follow-up here.
Posted at 01:59
Email ThisBlogThis!Share to TwitterShare to FacebookShare to Pinterest