The Life and Lies of a Some Guy with a Ph.D.

I was browsing in McNally Robinson the other day, looking for a copies of Surely You're Joking, Mr. Feynman and The Man Who Mistook His Wife for a Hat for my father's birthday, when I stumbled upon this sorry sight: 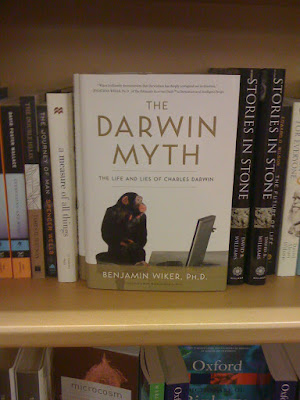 Oooh, he has a Ph.D.!
Now, let us be clear: I am not disappointed because this book was on a shelf in the book store. I am a fervent proponent of free speech and free inquiry, and I would not want to silence any voice, especially a dissident one; freedom is dependent on that. What disappointed me was that the book was on this shelf: 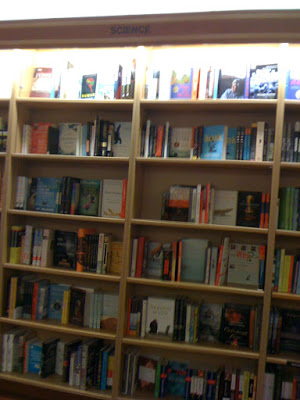 I apologise for the poor quality of the photograph. It was taken with my iPhone.
Yes, although it may be difficult to see, it is sitting on a bookshelf marked "Science".

Giving the book store the benefit of the doubt, one might point out (correctly) that the subject of the book is science (or rather, a scientist). Personally, I think that this is a rather flimsy excuse. Regardless of the subject matter, the content of the book is not science. One might charitably relegate it to the biography section, but we all know where it belongs: religion.

This is not a review of that book. Full disclosure: I have not read it, nor do I intend to. It does not behoove me to read every piece of woo-woo flapdoodle that manages to get published. But hey: if you've got new, interesting, cogent arguments... Well, let's hear them!

But this, I'm afraid, is not one of those arguments. Although we're told not to judge books by their covers, this cover provides us with as much as we need to know. We can dismiss the idea that science is at the base of this thing with the most casual glance at its title, a simple, petulant argumentum ad hominem. If the very title is a logical fallacy, need I look further? (Yes, the title of this very post conforms to the very same logical fallacy, but hey, that's comedy.)

Finally, I think that it would be fair to point out that I was looking for (one of) Richard Feynman's memoir(s) in the science section, rather than under Memoirs or Biography, but in point of fact I started in the biography section, and although there is quite a bit of science content in Surely You're Joking, Mr. Feynman, I think that it is also in the wrong place. But there are many levels of idiocy.
Posted at 15:08
Email ThisBlogThis!Share to TwitterShare to FacebookShare to Pinterest